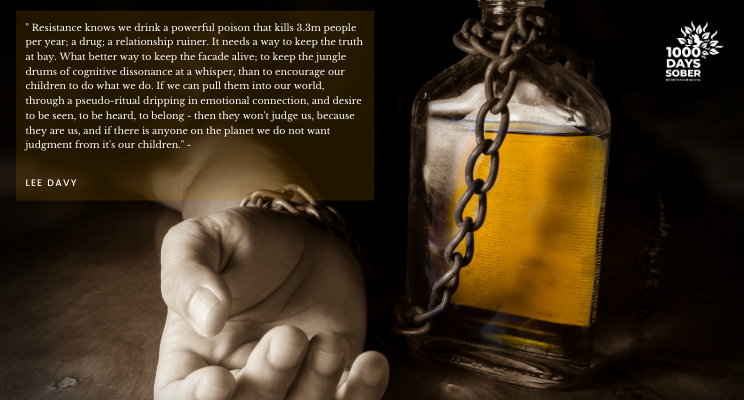 There's a scene in the 'Queen's Gambit,' where Beth and her stepmother, Alma, are in a hotel room. Alma, who has alcohol addiction, lies on the bed, sipping a drink when Beth asks her for a beer.

Beth gets the nod.

Beth drinks it a little too fast.

For a moment, there is a look of concern, like in the moment you inspect your bumper after a trivial car crash, but it passes within seconds.

"Can I have another?"

Beth gets another nod.

I am forever grateful that I became someone that doesn't drink alcohol when Jude was 10, because, as long as ambulances have flashing lights, I would have been Alma Wheatley.

Given how young and impressionable our children are when we give them 'permission' to drink, it's worth considering the instructions etched into the filaments of our mind.

Firstly, we have the ritualisation that comes with an adult giving a child permission to drink. It's a rite of passage into adulthood. Only, it's not a ritual rooted in love; designed to kill the remnants of Peter Pan energy. It's a pseudo-ritual designed to lock a child in an adult's body.

Secondly, Resistance knows we drink a powerful poison that kills 3.3m people per year; a drug; a relationship ruiner. It needs a way to keep the truth at bay. What better way to keep the facade alive; to keep the jungle drums of cognitive dissonance at a whisper, than to encourage our children to do what we do. If we can pull them into our world, through a pseudo-ritual dripping in emotional connection, and desire to be seen, to be heard, to belong - then they won't judge us, because they are us, and if there is anyone on the planet we do not want judgment from it's our children.

I was 14 when my father took me through my pseudo-ritual. I am sure he felt he was helping me. I am positive he believed he was building a bridge between us. I wonder if he would have acted differently had he known that because of that act, I ended up a boy locked in a man's body for 35-years.

If you're a woman married to someone like that, then you know how devastating that is.

In the past 10-years, I have tried desperately to become a man. At times, I have felt insane, unable to 'get it right.' I have no idea why Liza never left me. I have created a depression in her. I have ignored her. I have shouted at her. I have towered over her. I have tried to use my intellect to ridicule her.

I felt this was the way to be a man. I had no idea that I was a boy; a desperate, lonely, frightened, young boy, who didn't have a clue how to relate to himself, let alone a vibrant, beautiful, soulful woman.

But I am getting there.