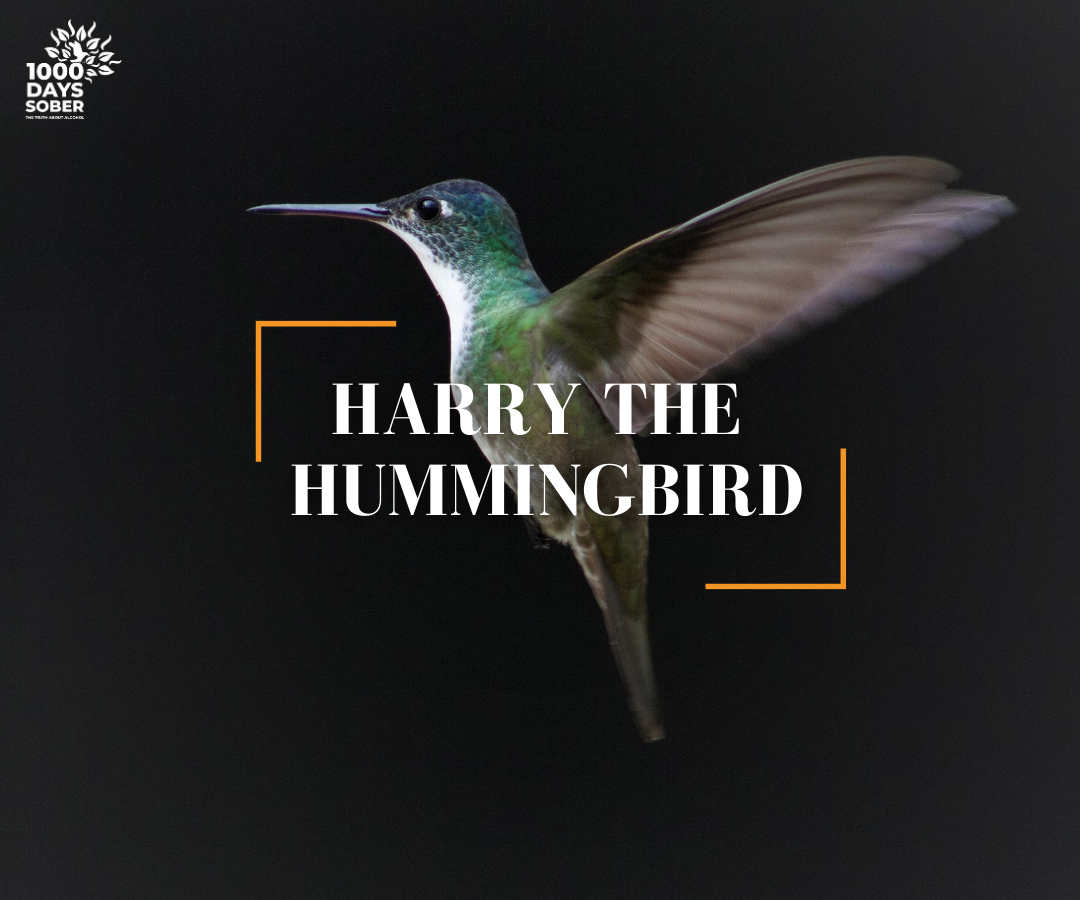 The STRIVE Method: Harry The Hummingbird

Over the next few months, you will receive a series of articles sharing the philosophy and process of The STRIVE Method, the beating heart of 1000 Days Sober. The STRIVE Method is a six-step process of change, and Harry The Hummingbird comes from the first of those six steps: 'Stuck.'

Have you ever stepped into your power; an effervescent glow illuminating the vault-like darkness of your world; a pointed finger leading to a sign that says "this way?"

Then at that precise moment; you're most auspicious and petrified moment; someone you love, chases you across the rooftops of your new being, desperately trying to push you off?

It happened to me.

One of the aftershocks of being someone that doesn't drink alcohol saw me quit my 19-year railway career to create 1000 Days Sober. Back then, I spread my message through my writing, and when I shared the news with my best friend, he said, "You're crazy. I have read your stuff, and it's not even that good."

The glitterball inside my heart stopped spinning.

I put the phone down.

Our relationship has not been the same since.

Why didn't my best friend fail to support me in my time of need?

Why did he hurt me so much?

There are seven species of hummingbirds in California.

One of them, the Black-Chinned Hummingbird, arrives in April and migrates to Mexico in early September. It doesn't understand why it follows migratory paths. It doesn't question them. When the time comes, it instinctually follows the charm.

That's what a Black-Chinned Hummingbird does.

Today, humans have the capacity to reminisce, process sensory information in the present, and consider future options. We have developed conscious thought, something that a hummingbird doesn't have, and this process allows us to explore through an understanding-based management system versus the instinctive-management based system.

Resistance is the voice in your head that prevents you from taking action when on the cusp of greatness.

"We fear discovering that we are more than we think we are. More than our parents/children/teachers think we are. We fear that we actually possess the talent that our still, small voice tells us. That we actually have the guts, the perseverance, the capacity. We fear that we truly can steer our ship, plant our flag, reach our Promised Land. We fear this because, if it's true, then we become estranged from all we know. We pass through a membrane. We become monsters and monstrous." - Steven Pressfield.

Imagine there's a charm of hummingbirds that migrate from California to Mexico each September, only this year one of them feels different. Harry the Hummingbird woke up with a fully conscious brain, adding the nerve-based learning system to his gene-based one.

On cue, the charm takes to the air.

Hundreds of miles into their journey, Harry starts to feel hungry. He looks down and spots a garden of flowers.

"I'll nip down there, and have something to eat."

As he changes course, the rest of his charm stop him from leaving. Nobody ever leaves the charm. The gene-based learning that has taken place since the birth of these beautiful birds does not include 'nipping off for some food.'

Harry returns to the charm, but the thought never leaves his mind. As the charm continues on its way to Mexico, the thought grows louder and more pronounced. The hunger pangs join in the deafening crescendo. Harry sees another garden full of flowers and tries again to leave. Once again, the charm stops him.

A feeling of confusion sets in, followed by guilt. Then something new happens. A voice sounds in Harry's head calling him stupid for trying to leave the charm. Then another voice tells him to ignore the first voice and to go and explore the new garden.

Instincts and the drive for exploration and change are driving him crazy.

Harry's problems aren't confined to his grey matter. Each time, Harry tries to veer off course to satisfy an inner need, he grows more distant to his charm because they fear his unusual behaviour. Eventually, the charm disowns Harry, and peck at him each time he tries to rejoin the group.

Harry is alone; confused and riddled with anxiety.

The decision to leave my job and explore other alternatives was one of a broad range of compulsions brought on by my new way of being. I wanted to discover and experience new things. I was afraid but had the courage and conviction to feel that fear and do it anyway.

My charm, including my best friend, was also afraid. Something in my being acted as a mirror and they started to question whether they were on the right path. Resistance reared its ugly head within them; only they acted swiftly to shut it down, by ignoring me, ridiculing me, and eventually ostracising me.

Lost and lonely, I reached out my finger and pointed to the sign that said, "This way." Something familiar amongst all the unfamiliarity. At first, I felt isolated and lonely, but then I saw someone else on the same path, then another, and then another.

Creating effective change in your life can feel liberating, exciting and incredible. It can also feel terrifying, lonely, and sad.

Hopefully, now, you know why.

It's only taken us 2 million years to figure it out.

Have you ever felt compelled to leave the charm to explore other aspects of life, but fear of lonely and disconnection prevented you from exploring?

If you want to learn more about the strive method,  then head to https://www.1000dayssober.com and sign up for a "Choose Yourself" Call